EIK helps Mine Operator to Improve Productivity During Monsoon Season

“With my 30 years’ experience of operating swamp excavators, the EIK hydraulic drive is a lot better and has more power than the chain drive systems. The hydraulic retractable pontoons make it easy to transport”.said Russel B. from Houston. AM200 with CAT320E 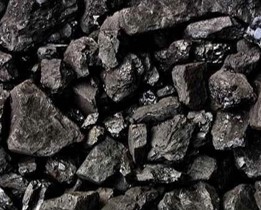 Coal is a ‘dirty’ word for environmentalists—it is often labelled as the most polluting energy source due to its high carbon footprint. However, coal is just as dear as gold for the millions of people across different continents whose livelihoods depend on it. Other vital energy sources, such as natural gas, though less polluting but are more susceptible to price fluctuations on the world market. Coal energy is still one of the cheapest, far cheaper than nuclear, natural gas, or oil. As a result, the world’s industries have increasingly shifted their focus to coal.

The ongoing quest for clean and renewable energy has prompted scientists around the world to race to develop new technologies that promise to be more environmental-friendly and yet economically viable for the masses, but until such time, fossil fuel energy will continue to dominate.

The United Nations estimate that world population will increase from the current 7.6 billion to 11.2 billion by the year 2100. The demand for energy will continue to grow, not only to cater to the increased population but also to cope with pressing demand triggered by the accelerated pace of urbanization for many developing countries. At least in Asia, new coal power plants are being built, and more are to be built.

When there is demand, there is always supply in equilibrium. The use of coal generates employment across industries ranging from mining, steel and cement production, to transportation, utilities, and coal ash disposal. In the previous issue of our On-Site Reporter newsletter, we have featured EIK amphibious excavators helping power plants to efficiently manage and recycle coal ash residues to comply with EPA regulations.

There are two basic methods of extracting coal: surface mining and underground mining. Surface mining is typically used when the coal is less than 60 meter below the surface. To gain access to the coal deposit, large-sized mining machines are used to remove the top layers of soil and rock. The coal is then excavated and transferred to a preparation plant for cleaning to remove dirt, rock, ash, sulfur, and other unwanted materials, increasing the heating value of the coal. The coal may also be sorted by quality and size. After the mining operation is completed, the soil and rock are brought back to fill the mine. The area is then revegetated and can be used for other purposes, such as farming, wildlife conservation, recreation, or other commercial or industrial projects.

Right Machine for the Job

EIK amphibious excavators have a well-established presence in the mining sector, helping mine operators and contractors tackle ongoing challenges related to dam tailing, dewatering, flooding, and more. Mining sites particularly in the tropical region have to endure months of reduced production and gruelling operational challenges during the monsoon season each year. Each monsoon season can stretch up to a period of 5 months, and loss in productivity is hefty especially when the commodity price is on a bull run.

Consider the case of a mine site concentrating on crushed steam coal and other high-grade coal for industrial applications.  The open pit mine operation has to deal with the aftermath of annual flooding during the monsoon period. Due to the nature of the site and its surrounding terrain, deluges of waterborne debris such trees and logs from higher ground can flood the pit in a matter of hours. These unwanted debris, coupled with thick layers of mud, pose significant challenges in the dewatering process by clogging up the water pump, and frequent stoppage is necessary to service and maintain equipment. Simply put, the clearing process is slow and punishing.

Conventionally, the two most common methods are to deploy long reach excavators at the pit fringe, as well as to build temporary access trails. Both solutions are far from ideal. Long reach excavators can only clear up to 20m from the edge; constructing temporary access trails for excavators is time-consuming and costly due to the size of the pit,  and they have to be subsequently deconstructed. During this time, there are forty articulating trucks, twelve units of 80-ton class excavators, two 120-ton excavators, and five 50-ton excavators basically semi-idling. 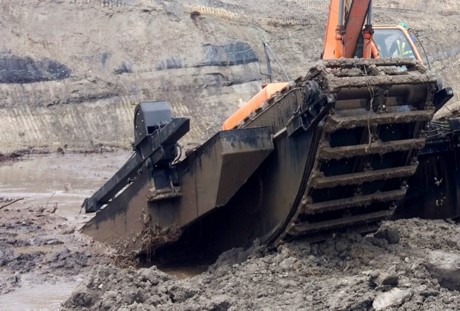 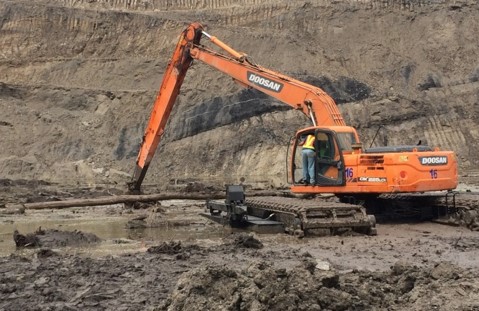 DX225 with EIK AM200 amphibious excavator clearing debris in pit

In comparison, the use of the amphibious excavator in the clearing operation has proven to be extremely efficient. The large footprint of the pontoons create a very low ground pressure, enabling the amphibious excavator to maneuver unconstrained in very soft terrain. Thus, the entirety of the area can be accessed and cleared without any access trails. A standard crawler excavator would fail miserably in this regard. 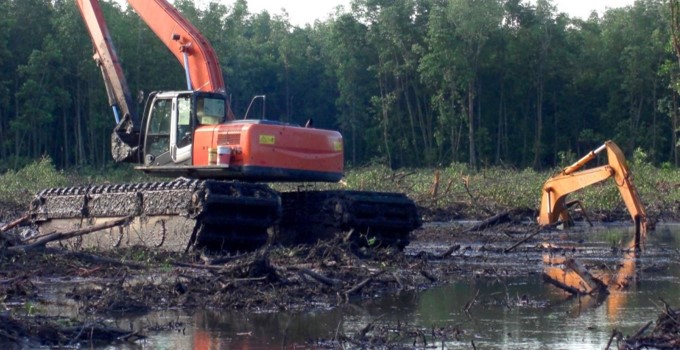 The ‘Show’ Must Go On

The mine operator was convinced that the amphibious excavator is the most viable machine for such a scenario to date. No other solution in the past has come close to its efficiency. Mining industry is known for it cyclical trend, at the time this article is written, the demand for coal is on the rise. Mine operators are always in the race to outdo competing mine sites for efficiency to maximize profitability and the Return-On-Investment of capital equipment. With the help of the amphibious excavator, the ‘show’ can now go on regardless of season.

EIK’s patented ‘multi-synchronous direct drive’ system is credited for being the pivotal technology that positions us at the forefront of amphibious excavator products.  This paradigm shift in how modern amphibious machines are designed has won over the hearts of numerous customers, for both new and experienced amphibious excavator users.