Many of us probably still have a vivid memory of the 2017 hurricane, Harvey, reigning havoc in the Gulf Coast, especially for those who have had to endure the brutal aftermath. Harvey first made landfall over San Jose Island and then near Rockport, in south-central Texas, late Aug. 25 as a Category 4 hurricane, threatening millions of residents with 130-mph winds, heavy rains, and a massive storm surge that swamped coastal areas. Harvey ranks as the second-most costly hurricane to hit the U.S. mainland since 1900, causing about $125 billion in damage. The storm dumped more than 27 trillion gallons of rain over Texas, with one-third of Houston completely flooded. Some parts of Houston received more than 50 inches of rainfall. An estimated 13 million people were affected, nearly 135,000 homes damaged or destroyed in the historic flooding, and up to a million cars were damaged.

Public Works departments of major cities that have been hit by hurricanes and floods are investing billions of dollars on improving infrastructure on flood mitigation and prevention projects. Most flood prevention projects involve the widening and deepening of existing water channel systems in the city and in residential areas. The city of Houston is one such example, every time a hurricane has landed, it damages embankments and causes soil erosion in waterways, resulting in millions of cubic yards of sand, mud and silt settling in creeks, rivers, and reservoirs. As a result, creeks and reservoirs are not able to hold the intended amount of water;  a moderate to heavy rain fall will pose a huge risk of flooding.

Creek widening and deepening in progress with amphibious excavator

This project, taken on by Texas Dewatering, is to deepen and widen a channel by removing 278,000 cubic yards of material over a 2.2 miles. The banks on both sides of the creek have eroded toward the middle and was heavily silted. The tropical weather in Texas is a thriving environment for aquatic plant, if left unattended, the fast-growing plant will further cause obstruction and decrease the flowrate of traveling water.

The dredged material has to be transported to an approved disposal site located few miles away. Texas Dewatering was only given 150 days to complete the entire job, rain or shine. This is equivalent of hauling 350-400 truck loads per day on a 6- day work week schedule. A logical option is to increase the number of trucks and excavators to help speed up the process,  but the main obstacle to overcome;  how to remove the silt from the river spanning 105 – 120 feet wide fast enough to meet the daily quota? There are restrictions on transporting wet and drippy material across local subdivisions, which not only creates a logistical nightmare,  but also implements strict safety measures to be held within the local community and township.

“The critical success factor of this project is to find the most cost effective and swift method to dredge material out from the water and dry it before hauling away” says Adrien, the project manager. A number of options have been considered to complete this project and overcome the obstacles. The most common option would be the use of a Cutter Suction Dredger (CSD), dragline, flexi-float pontoon system.

With a CSD, a minimum of two dredgers are required to run full time with the assumption of zero down time. Transporting and assembly of a CSD at the site is a major challenge because of the limited space on either side of the bank for loading, unloading and assembling. CSD machines can be very noisy when running at full capacity; noise pollution at the residential area is a major concern. After the material is pumped out of the water, it has to be stored in a temporary holding area for drying. A typical CSD can only pump around 10 – 20% of solid material, which means 80% or more is water. A CSD requires a certain water depth for the cutter head to be effective and operate optimally, however, the varying water depth of the creek does not permit the CSD to operate in even the most optimum conditions;  a major risk to the timely completion of the project.

The Flexi-float platform is a ‘Lego’ concept style of floating pontoon where it can be stacked or assembled to form a floating platform of any desired size. Long reach excavators and supporting equipment can be placed and operated from the pontoon deck to dredge material out from the river. The flexi-float pontoon is flexible and can build a working platform adapting to the varying width of the river, the downside is it is tedious to move around. A crane is needed at the site on full time basis to construct and deconstruct the flexi-float as the dredging operation progresses. Lack of access to roads for the cranes in certain sections of the river add more complexities to the task. Moving the flexi-float platform would require additional steps, procedures, time and money.

The amphibious excavator fits the bill perfectly. They are neither cumbersome to transport, nor require vast 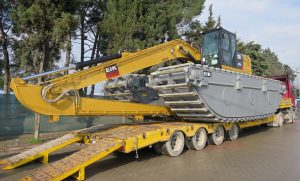 assembly space and supporting equipment on site as compared to a CSD, flex-float or dragline. Deployment is swift and easy, a fully assembled amphibious excavator can be transported in a lowbed trailer as shown in the picture. The EIK pontoon undercarriage has a hydraulic operated variable gauge system, allowing the large undercarriage to be retracted to a narrow footprint for ease of land transportation. Once at the site, the machine can unload on its own and spring into action immediately.

The site condition is particularly challenging for typical construction equipment. The riverbed is very soft and only a machine with extremely low ground pressure with the ability to maneuver freely, without fearing of sinking or getting stuck, would work. The amphibious excavator is designed to trek on soft and swampy terrains, and on shallow water too. The high and wide pontoon undercarriage can easily overcome the varying water depths in different sections of the river. The pontoon also has sufficient floating capacity to support the entire machine mass as a safety design feature. Low ground pressure is the hallmark of the pontoon undercarriage, it permits the machine to move unconstrained in this difficult ground condition where standard crawler excavators  would not be able to work.

Mid year, in South Texas, is the start of the rainy season and can be unpredictable. These weather conditions add further pressure to the already tight schedule. Multiple amphibious excavators are working alongside with other equipment racing against time. The main task of the amphibious machine is to dredge the riverbed to the desired depth. Dredged material is temporarily placed at the bank for drying before transporting to the disposal site.

Unknown to many, these machines are working on an active channel where water level can vary from 2 to 10 feet, or more at times. 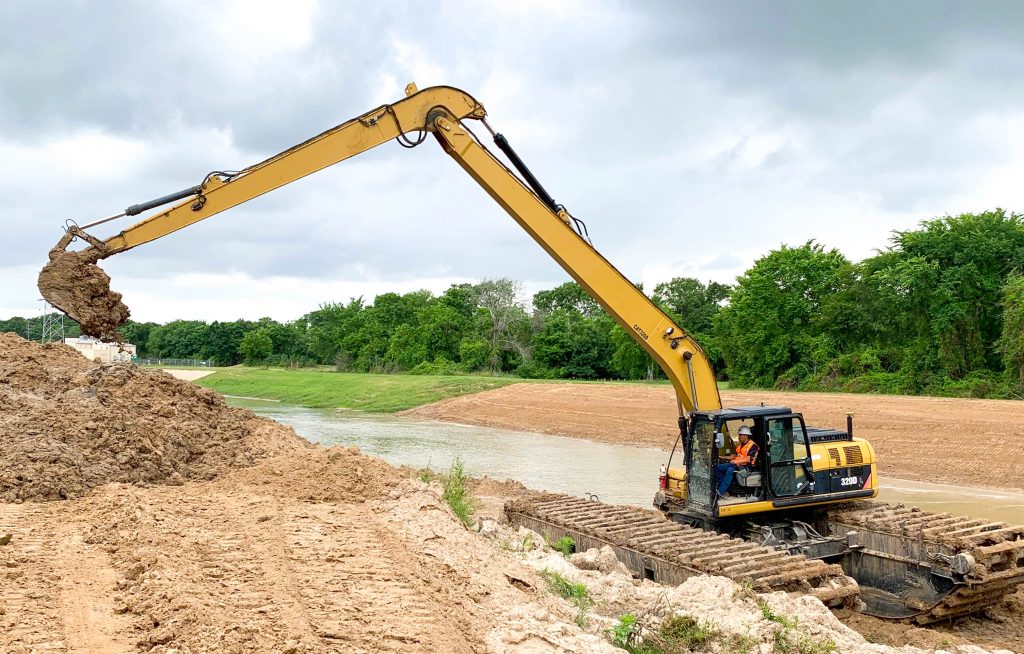 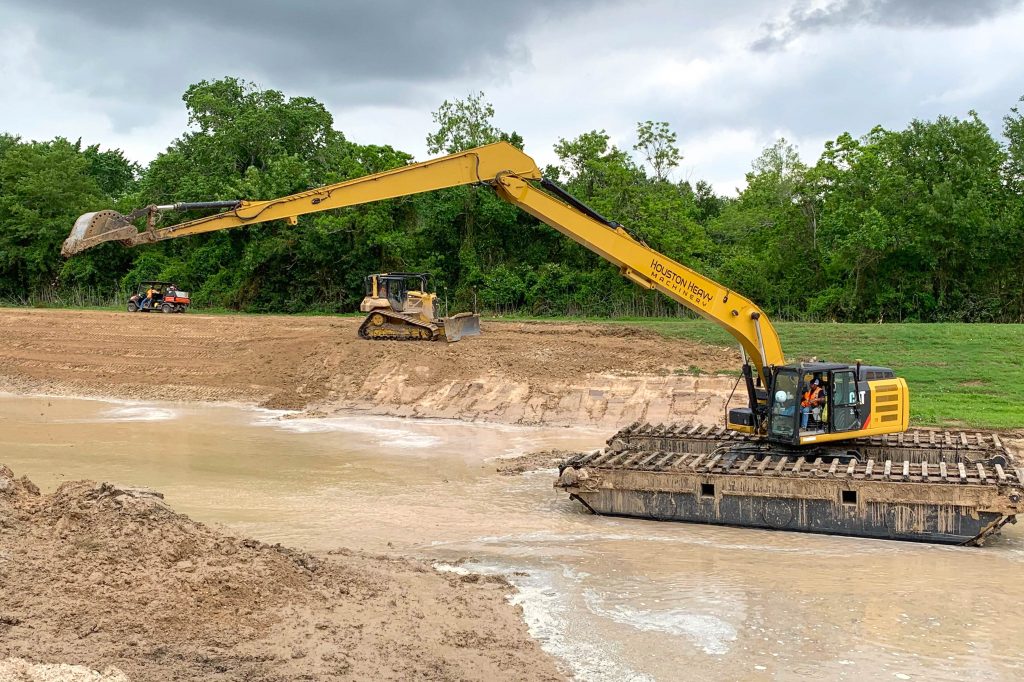 Temporary holding area for drying of wet material prior to disposal

An unexpected event took place mid way through the project. Hurricane Imelda came through and the work had to stop for a week. The hurricane ruined sections of the completed job and brought in additional sediment back into the river. Amphibious excavators are mobilized back to the damaged section to carry out the repair. The repairs took a week and a half to complete, an additional work schedule outside of the original plan.

“This is the perfect machine and cut out for the job, without it, I don’t see how we could have completed the project ahead of schedule” says Adrian, with a huge sigh of relief.

EIK’s patented ‘multi-synchronous direct drive’ system is credited to be pivotal technology that positions us at the forefront of amphibious excavator products. This paradigm shift on how modern amphibious machines are designed has won over the hearts of numerous customers and for both new and experienced amphibious excavator users.

What our customers have to say about EIK:

With my 30 years’ experience of operating swamp excavators, the EIK hydraulic drive is a lot better and has more power than the chain drive systems. The hydraulic retractable pontoons make it easy to transport.

We were in the water everyday, the machine maneuvered very well and had a lot of power.  This was my first time using polymer tracks, I was skeptical, but after two months, was very impressed by their performance and durability.

The climbing power provided by 4 hydraulic motors is unmatched by the local products using a sprocket and drive chain.  The quality of construction is the pinnacle of professional.

The EIK is well built and heavier duty in design than most swamp excavators but its power is its strong point. I also like that it does not have a drive chain.

We have not had one problem at all.  With the telescopic retractable feature we are able to haul our machine from one jobsite to another without a permit.

We looked at some of the manufactures and decided on the EIK AM80 as the reports on power and build quality were rated highly. We are overwhelmed with the power the double drive produces and the way the arm folds up for transport. I will be ordering another machine in the near future from EIK.