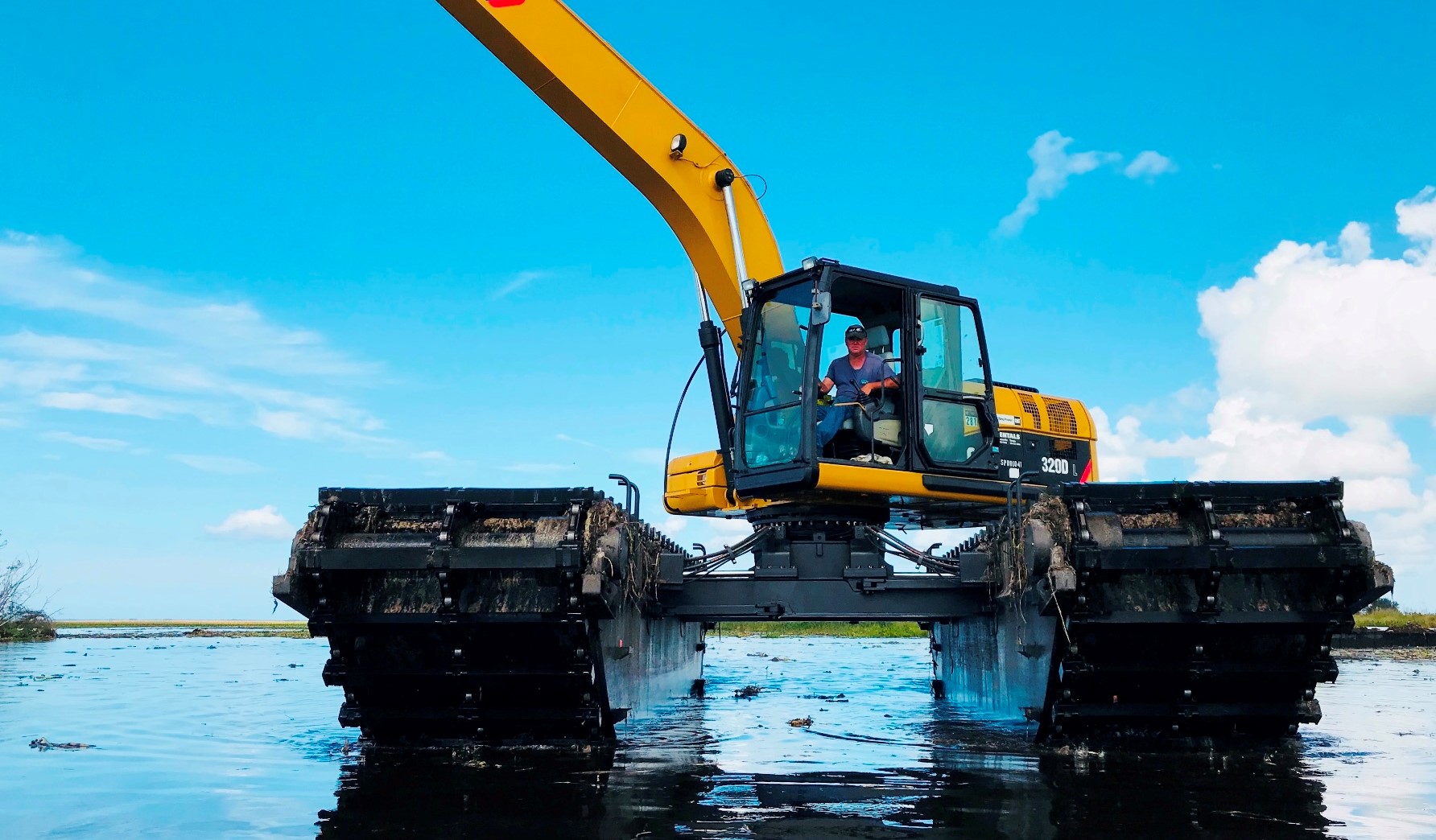 Wetland Management with an Amphibious Excavator

Lakes are part of the natural beauty of our living earth. They are not only water sources, but food sources for millions of people around the world. In modern society, natural lakes and wetlands also provide opportunities for recreational activities such as water sports, fishing and wildlife hunting.

In Florida, the Fish and Wildlife Conservation Commission considers 18 of the 26 non-native aquatic plants found in their public waters to be invasive. Invasive plants were found in 92% of the public waters inventoried during 2017, spreading across 66,600 acres of wetlands. This includes an estimated 55,700 acres impacted by the hydrilla standing crop as well as subterranean hydrilla tubers. This tubers are notorious for sprouting and spreading rapidly. Invasive aquatic plants degrade and diminish valuable aquatic environments. In some cases they impede flood control, endanger infrastructure, and hamper recreation, and could even threaten Florida’s economy, agriculture, horticulture, tourism, and natural resources such as wildlife.

The Challenges and Debates

The removal of overgrown nuphar and water hyacinth are very common in the Southern States. This invasive aquatic plant has very dense and fine, fiber-like roots that are tightly interweaved. They grow rapidly developing into large floating mats or islands, especially during the high growth seasons. Left unchecked, trees eventually grow on these islands causing it to be far too costly and tedious to remove.

Each of these methods have their own benefits and limitations. However, the most commonly seen are the mechanical and chemical control methods, in spite of the latter being controversial. There are ongoing debates on its long term impact to the environment. Recently, there have been reports of aquatic plants developing resistance to the herbicides used in lakes and wetlands. 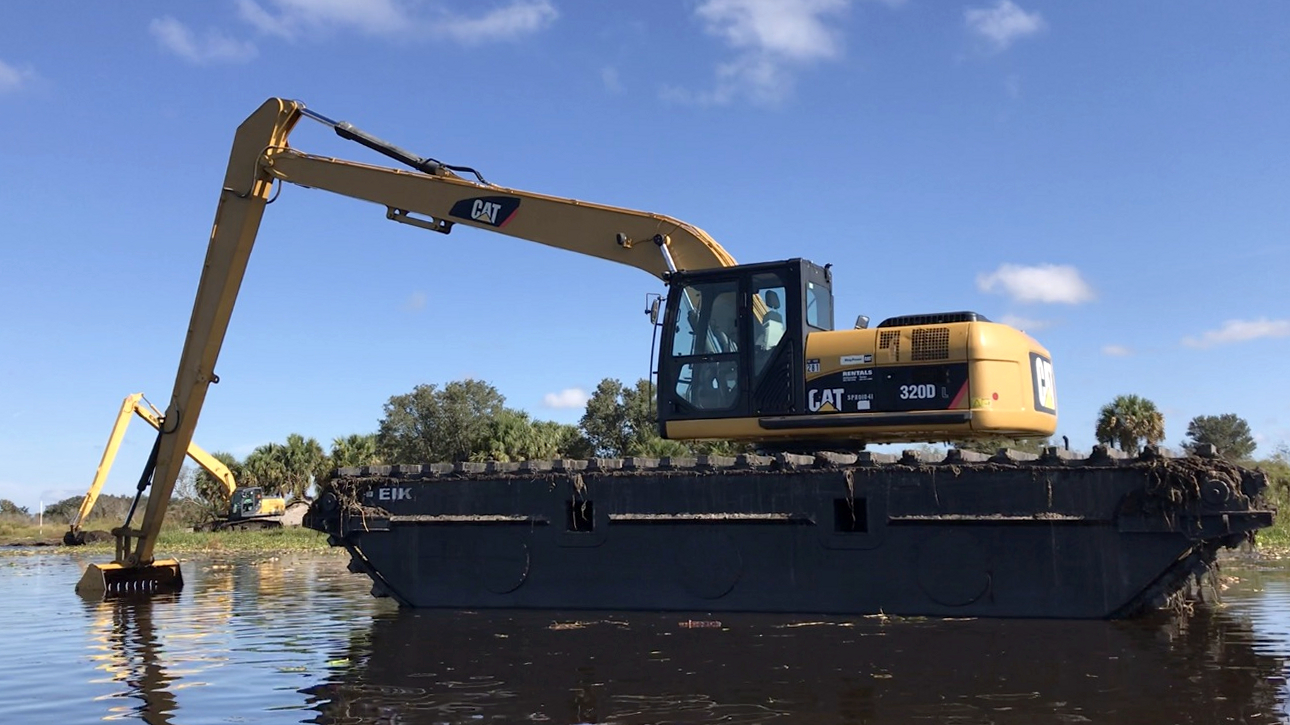 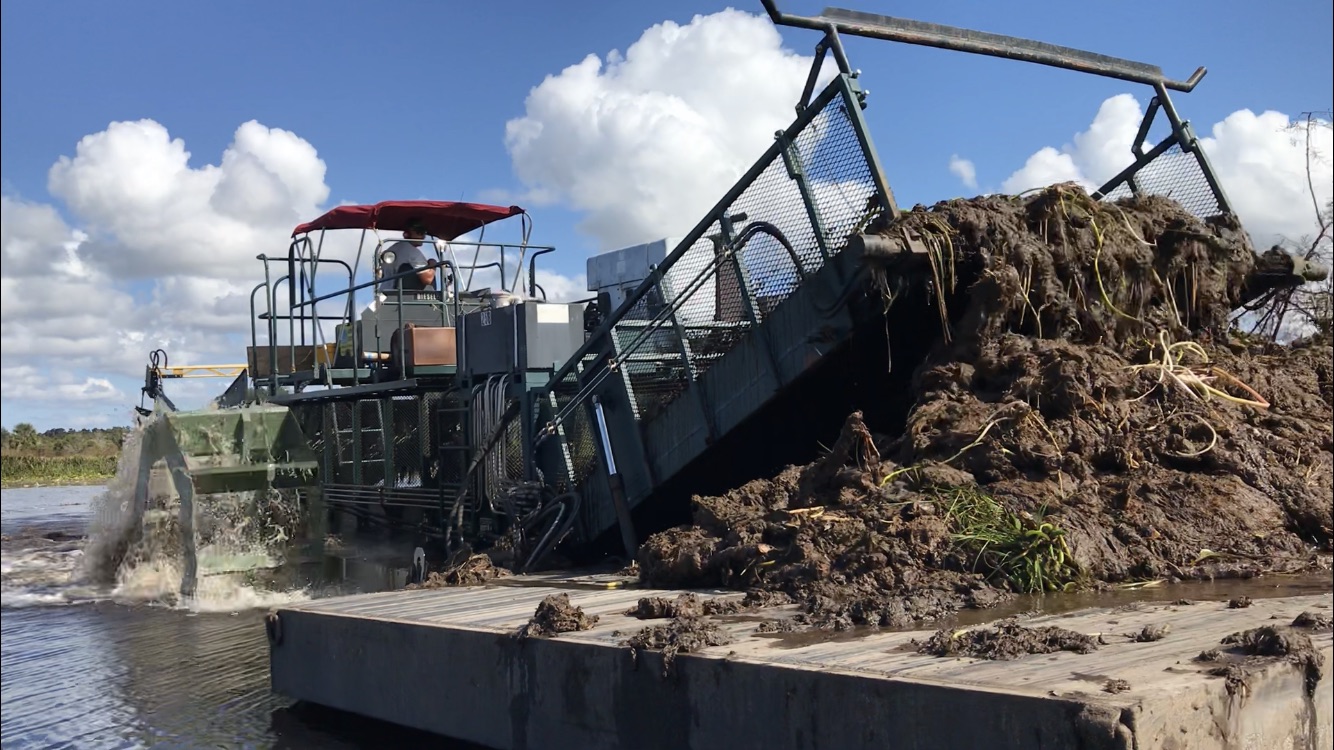 Mechanical control is one of the oldest forms of invasive aquatic plant management, and it remains effective for many waterways and wetlands. In this particular case study, an EIK-Cat320D long reach amphibious is used alongside with other equipment. The process begins with an amphibious machine trekking to the targeted spots to loosen and break the large floating mats of aquatic plants into small, manageable pieces. Some of these plants are rooted to the ground and are not easily removed by weed cutting machines. Once the plants are loosened and broken up, the harvester will go around to remove them from the water and convey it onto a floating pontoon. This floating pontoon act as a dumping platform for the harvested plants, which will be subsequently transferred inland for proper disposal.

Prior to the introduction of the amphibious excavator to the existing machines fleet, chemical agents had to be sprayed to kill the targeted plants before the harvester could remove them. A harvester is not designed to uproot or break up large size floating plants bundled tightly together. There is a necessary interval between the spaying and harvesting’, for the chemical to take effect. Furthermore, native plants are unavoidably killed as well.

The amphibious excavator has allowed the work to be carried out in a much more efficient way. The machine treks freely in the wetlands without fear of being stuck on the soft and marshy terrain. The uprooting and harvesting process can now be seamlessly and simultaneously executed without waiting for chemicals to take effect. In fact, there is no need for any chemical spraying, and no chemical contamination to the environment. The extremely low ground pressure of the amphibious machine will neither cause any permanent damage to the wetlands nor the native aquatic plants.

Many of these wetlands are located in hurricane prone areas, and it can be adversely affected during the hurricane season. The amphibious excavator can be used to clean up, repair, and restore wetlands. It has been proven numerous times to be an indispensable machine in this respect. A truly multiple-purpose machine that provides an attractive ROI (Return On Investment) for our customers.

High ROI is a customer retention strategy that has serves us well. It is our mission to ensure we maintain our pole position among other competitors.